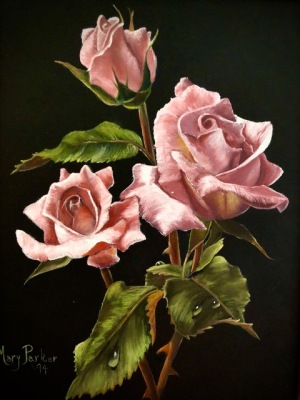 On June 15, 2022, Mary Eunice Fennell-Parker went home to be with the Lord. She was 95. Mary was born in Tarrant City Alabama December 22, 1926 to John Allison and Annie Laurie Fennell. She is survived by three children, Allison Duffer, Penny Perot and Barry Parker, and her brother John Allison Fennell Jr. of Pompano Beach Florida. She had 3 grandchildren, Chad Duffer, Julia Duffer and Melissa Perot, and 2 great grandchildren, Finn and Ava Duffer.

Mary was known throughout Eastern Birmingham as a major influence in women’s Bible studies during the Christian Revival of the late 1960’s and early 1970’s. She gave many years as a volunteer at the downtown Jimmie Hale Mission and was part of an international missions’ team to Belgium.

In her later years Mary was well known as an accomplished award-wining artist specializing in oil and watercolor mediums. Many of her works were on display at the public library in Oneonta Alabama where she lived until her death.

Services will be held Monday June 20th at Jefferson Memorial Funeral Home in Trussville. Visitation will begin at 9:00 am and the service will commence at 10:00am. In lieu of flowers the family asks for donations to be made to the Jimmie Hale Mission and to Amedisys Hospice Care.

To send flowers to the family or plant a tree in memory of Mary E. (Fennell) Parker, please visit our floral store.

A Memorial Tree was planted for Mary

Join in honoring their life - plant a memorial tree